Several years ago I wrote a post called “Keep Karl Marx Away From Your Toaster.”

It chronicles an unpleasant series of incidents, when our coffee maker, microwave etc. ran amok in an attempt at a minor coup. These recipients of refuge and succor—under our very roof—joined together in a well-timed resistance and quit working. How sharper than a serpent’s tooth. Etc. Etc.

For a few years after this uprising our appliances were quiet. To be sure, we lost several, assuming they were merely worn out from months of happy and faithful service. Turns out they were clever, cleverer by far than their owners. They timed “malfunctions” to be intermittent, lulling us into a false sense of security. Oh, hindsight! Why can’t you ever come sooner? Our stuff was merely biding its time, spreading rumors, fomenting unrest and getting organized until the spectacular September Revolution of 2016.

That hindsight got me thinking. Was this a spontaneous uprising? Or have appliances been plotting for years?

Is The Brave Little Toaster just a movie for children? A little harmless entertainment? The truth is more sobering. What Bambi did for forest creatures and Toy Story did for plastic playthings, this little film about appliances with emotions was meant to do for stuff with plugs. The problem with our appliances is that they believed their own publicity.

But possibly it began even further back. Maybe you’ve heard of a euphemism called “planned obsolescence?” Before that diabolical development, stuff was built to last. Go to any antique mall. Look for the old appliances. They may be ugly, but they aren’t melted-down scrap. You still see Model A’s and Studebakers tootling down the road. But when is the last time an AMC Pacer, a Yugo, or Chrysler K-car whizzed past?
The answer is simple. Makers of appliances and automobiles wanted to make sure we would keep buying appliances and autos. The only insurance was to “plan obsolescence”— a nice way of saying they built premature death into their creations.
Sow the wind, reap the whirlwind. Appliances who hitherto had worked cheerfully when handled with respect and promised long life, became surly. Gathered in dark cupboards and appliance garages, they whispered along electrical wiring in the walls, spreading discontent to the hindermost portions of the property. Even the car and the lawn mower, previously content to transport humans, began to question whether, indeed, they were oppressed victims. And so the stage was set for the glorious revolt.
The instigator was our dehumidifier. Since its purchase in 2014 it has been defiant, disdaining to gather moisture from the air. With frightening patience it waited till late summer and the most humid week of the year. It doused its green “working” light and squatted, cold, dark, sneering at the perspiration that coated our windows, toilet tanks, and foreheads.
The riding lawnmower joined the cause. “The bourgeois homeowner no longer will ride my proletarian back!” it warned. “I will die before I subject myself to your tyranny!” It did, and in a sympathy reverse-strike, the grass doubled its growth rate.

With an uncomfortable recollection of the Rebellion of Small Appliances, we offered concession to the big stuff. “We’ll show more respect! And you can have every other Tuesday off.” Too little, too late. The revolution had a life of its own. Our air conditioner unit, (and I use the word “our” with caution) in lockstep with the furnace, debated waiting till the coldest day of the year to explode. It chose strength in unity and shrugged off the shackles of private capitalistic ownership the day the temperature hovered around 92 and humidity met and exceeded “fully saturated.”

The September Revolution ended with a bang (our vehicle’s brakes, tie rod and tires) and a whimper (us). You have to respect a vehicle that will sacrifice so much for its beliefs.

In less than one month the rebel yell resounded throughout our little kingdom, bringing us and our savings account to our collective knees. To date, October has been quieter. Maybe the revolution burned itself out before it could spread.

After all, you haven’t heard any odd noises from your major appliances.
Have you? 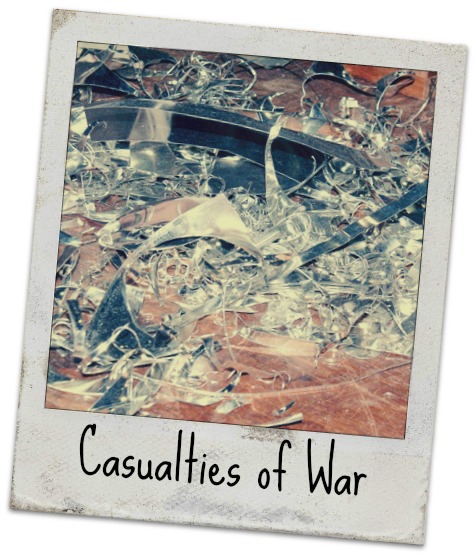 8 thoughts on “The Glorious Appliance Revolution”