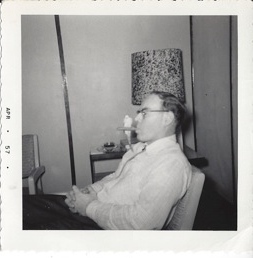 More pictures of my dad, in anticipation of his 100th birthday on SATURDAY. Not Friday as previously reported.

Here is the man convicted of his homeliness. But could he be any cuter? I think no.

Speaking of no, the adorable little girl is not me. That is my cousin Marlene. I was not even on the horizon yet. Even the parakeet hatched before I did.

I almost forgot the Pithy Saying of the Day! (according to Dad, this is advice that came from HIS father):

There. Put that in your cigar and smoke it 🙂