Don’t you hate this awkward holiday wasteland between Halloween/Reformation Day and Thanksgiving? While The Tuesday Prude strongly encourages the observation of Veterans Day, it is one of those sober, reflective sort of holidays. But the trick-or-treating candy is running low and it’s too early to defrost the turkey. Is there anything to celebrate?

If you are British you already have your Guy Fawkes day cards sent, your Guy Fawkes bonfire laid, your Guy Fawkes effigy stuffed. If you live west of the Atlantic you may need a little history lesson:
In 1605, Guy Fawkes and his 12 co-conspirators planned to blow up the government in general and King James in particular. Guy was caught trying futilely to ignite barrels of old gunpowder he’d hidden in the basement of Parliament. Poor Guy’s days were dramatically shortened upon this discovery.

Every Nov. 5 since, bonfires are lit all over England, Guy Fawkes is burnt in effigy, fireworks are set, money is begged (sort of like the monetary form of trick-or-treating) and candy called Treacle Toffee is made.

Maybe we Yanks should start gathering the ingredients to make Treacle Toffee (brown sugar, cream of tarter, black treacle and corn syrup.) Because word on the street is that some folks want to bring Guy Fawkes to this side of the Atlantic.

We are all in favor of more holidays, especially ones that include bonfires and black treacle. But Guy Fawkes Day may present some challenges for multicultural, slightly schizo, holiday crazy Americans.

States-rights, libertarian types will hold Guy up as a hero and wear masks to honor him (he looked like a cross between a Pilgrim Forefather and one of the Three Musketeers). Supporters of big, centralized government will join their British cohorts and burn him in effigy.

Those who want to see their 2nd amendment rights upheld will celebrate Guy and his gunpowder. Those who believe the right to bear arms is outdated and dangerous will burn him in effigy. Well, maybe they won’t burn him. Just wave a can of pepper spray.

Guy wanted to blow up Parliament and the king because they were Protestant, and Guy wanted England to return to its Catholic identity.  Maybe, in the spirit of good, ecumenical fun, Catholic parishes would dress up in the Guy masks while those who identify themselves as Protestants might sing the little ditty below:
Remember, remember, the 5th of November
The Gunpowder Treason and plot;
I know of no reason why Gunpowder Treason
Should ever be forgot.
Guy Fawkes, Guy Fawkes,
‘Twas his intent.
To blow up the King and the Parliament.
Three score barrels of powder below.
Poor old England to overthrow.
By God’s providence he was catch’d,
With a dark lantern and burning match

The multitude of Royal Family fans in the States will shudder at the thought of ANYONE daring to hurt one of precious little Prince George’s ancestors and give the Guy Fawkes effigy a piece of their mind. High fructose corn syrup haters will experiment with Stevia sweeteners in the treacle toffee and radical environmental groups will picket wood-burning bonfires. Hallmark will make Guy cards and ornaments and we’ll have big inflatable Guy Fawkes in our front yards.

Has something about this made you a bit uncomfortable? Maybe you are reminded  of a shameful period in our nation’s past that involved burning symbols as a means of intimidation?  The Tuesday Prude agrees. The idea of burning anything that is supposed to resemble a person brings back too many bad memories.  But Americans can still have fun with this holiday! The bonfire (sans a stuffed Guy) can be the ultimate form of relative fun. It can represent whatever you want it to. 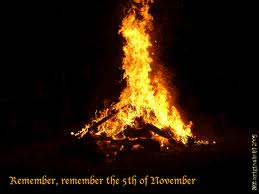 Whether you are pro or con big government, Catholic or Protestant, want to abolish weapons or stockpile them, love the House of Windsor or can’t name a single person who lives in Buckingham Palace, Guy Fawkes Day can be a great way to fight back the dark November night.
We can do this, my fellow Americans. We can turn this bastion of British merry-making into an American-flavored holiday.
Holler boys, holler boys.
And see if we can have a Charlie Brown Guy Fawkes TV special ready by next Fifth of November.