Even the most eloquent of us recognize that brevity has its place.
Take Benjamin Franklin.

In 1754, as the French and Indian War loomed, he designed a political cartoon of a dismembered snake, to remind the colonists they needed to join each other and Britain in the battle.

But what to put for a caption? He may have tried “The Confidence of the French in this Undertaking seems well-grounded on the present disunited State of the British Colonies, and the extreme Difficulty of bringing so many different Governments and Assemblies to agree in any speedy and effectual Measures for our common defense and Security; while our Enemies have the very great Advantage of being under one. Direction, with one Council, and one Purse” 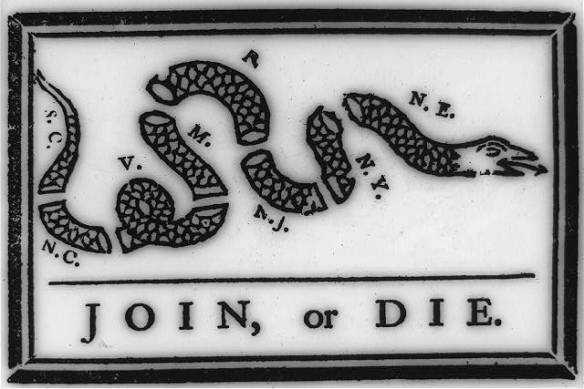 Slogans are meant to communicate a larger, more complex truth or belief system.
But not without hazards. A slogan is only a hook with a limited function. A lot of hats might be hung on the slogan without fully comprehending the wall that supports it.

Take “Join, or Die.”
It could be interpreted as a threat, a promise, or blanket permission to storm the streets with musket in hand, rooting out non-joiners.

More than ten years after the slogan hit the colonies, Patriots advocating for revolution adopted it. Franklin, at first, reminded colonists that it was intended to unite them in “management of Indian relations.” Be careful, folks, he was saying. Don’t grab the slogan without knowing what comes along with it.

No one listened. “Join, or Die” came to represent vigilance and loyalty and revolution to Patriots, but treachery to the Loyalists.
Same hook, different interpretations, world-altering repercussions.

Another thing about hooks. They’re attached to walls. Sometimes the wall is made of solid oak and other times it’s cardboard painted to look like sheetrock. That hook might be pretty. Or maybe not so much, but if we really want to know what is holding it up we need to look behind it.

“Second Amendment Forever” might hang from a wall built of hate and barbed wire and love of violence.
It could also be attached to a solid structure of respect for the Constitution and wisdom of Founding Fathers and honor for the rule of law.
The slogan can’t represent the entire belief system any more than a hook reveals the composition of the wall.

Some slogans appear to be at odds with each other.
“Black Lives Matter” and “Police Lives Matter,” for example.

A sense of outrage and hopelessness may have fueled the first, desire for orderly society and respect for those in uniform the second.
Plenty of people want to hang hats on both hooks, maybe looped with an “All Lives Matter” braid connecting them.
Plenty more, gathered around one or the other, don’t care about the wall behind the opposite hook. They just want to burn it.

They see only the three little words, not the host of words they represent.

Some hooks generate such strong responses that we automatically nail them to the wall we assume they belong on. Hey you! “No Vaccinations Please” proponent! Step over to the “We Hate Autism.” “Vaccinations Cause Autism” and “Pot Smoking Airhead” walls.

The appropriate one, though, is often more complex and layered than an across-the-board mishmash designed by loopy plant-eaters and antisocial homeschoolers. Nor are the “Vaccinations Save Lives” hooks all supported by “Vaccines for Everything” or “I Trust Government” or “Big Pharmaceuticals=God.” Many walls behind each hook are built with equal parts trust and research and concern.

Tree huggers don’t all hate loggers and all loggers don’t hate the spotted owl and all Democrats don’t want to sack the Bill of Rights and all Republicans don’t bow at the feet of big business and all Libertarians don’t smoke weed. But when slogans like “Save the Trees” or “Lock and Load” or “Government Kills Freedom” are nailed to their walls they have trouble conveying the supporting mesh of facts and experiences and beliefs and passions and dreams.

Hooks make hate easy. They are small, serve only one function, are easy to damage.
In this post-election America we are seeing a lot of hooks being gouged out of their walls. A single ballot is supposed to reveal the complex infrastructure that led to that vote? No way. But the angry assumptions made about the person casting the vote is leaving gaping holes in vandalized walls.

The slogan hook doesn’t deliberately set out to confuse. It just can’t provide an analysis of its wall. It can be a rallying point but is too flimsy to hold the weight of an entire ideology.

“I love you” is a charming little hook. Unless attached to the brick and mortar of concern and action and compassion and camaraderie, it isn’t worth the rivet used to attach it.

“God is love” isn’t even a stand-alone slogan. The Bible needs almost 800,000 words to demonstrate the fact.

Follow The Tuesday Prude (aka Anita Klumpers) on WordPress.com