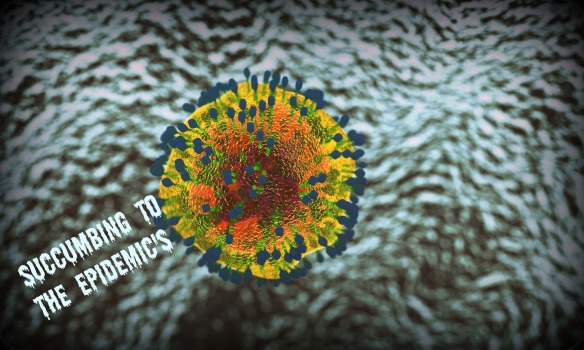 There, for all the world to see, is a misplaced apostrophe. You took a common garden-variety plural noun—more than one mosquito. (Not that there is any such thing. They travel in battalions.) You made it into a possessive. (Don’t let the mosquito’s WHAT carry you away? Their tiny legs?)

I know, I know. We have the option to edit. But aren’t you worried that this is just the first symptom of a more serious underlying ailment? 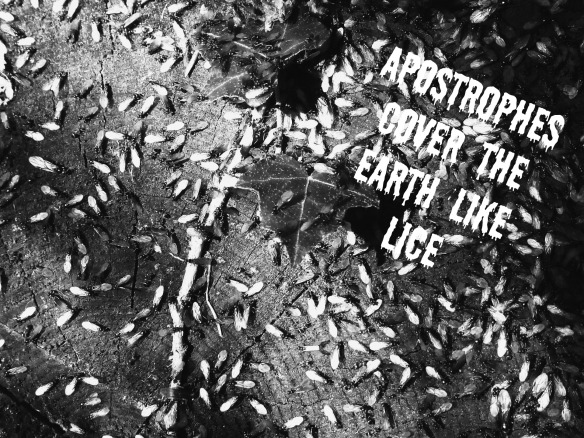 Why did we think we could avoid infection? Apostrophes cover the earth like lice or fleas.

At the grocery store.
BANANA’S FOR SALE

On billboards
THE BEST LAWYER’S MONEY CAN BUY

In Advertisements
TATTOO’S AND PIERCING’S

On menus
TODAYS ENTREE’S
(this one is doubly potent)

Books and social media posts and poorly edited articles swarm with apostrophes that are where they shouldn’t be.

How did I think I could avoid being stung? A tiny apostrophe bacterium works its way from my eyes and worms into my brain. And I break out in misplaced apostrophe.

Do you want to know how bad it has gotten? On my fourth example above, above TODAYS ENTREE’S,
I put an apostrophe before the “s.” In menus!
Is there any hope?

Maybe I just have a weak constitution. Maybe I’m more susceptible to various punctuation plagues.
I suffer from a chronic case of Comma Elimination. My editor added several hundred commas to my latest manuscript. I missed inserting them after introductory phrases.
Well my excuse is that my comma-typing center finger was permanently affected by this plague. No really.
A side effect—or possibly a stand-alone affliction—has resulted in several instances of writing the word “to” (meaning “toward,”) when I meant to write “too,” (meaning also or excessively). This type of horrific mistake makes me feel that Mr. Hyde has taken over my reasonably well-educated Dr. Jekyll writing persona.

Maybe it isn’t too late for me. Vaccinations of Jane Austen, perhaps.
A diet high in grammar workbooks and booster shots of peer critiques administered regularly.
Add going cold turkey on apostrophes for a time and I may be able to kick this thing.

Once I get my strength back maybe that center finger on my right hand will regain function and be able to hit the comma key.

However only time will tell.